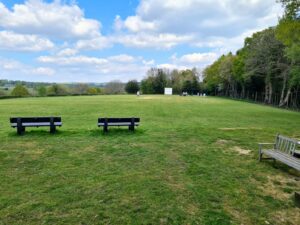 A Win and a Whiff of Wistfulness

An early start to the season for Salix featuring a trip to the Downs, plenty of sunshine, a pitch with some severe slopes and a winning start to Daveski’s silver jubilee season with the club. There were only seven Salixites and Jack from the CAC taking the field so the Oppo kindly lent us 4 players (Gary, Glyn, Jack and Ian) bringing us up to 12, the fixture being 12 a side*. The Smutmeister was also present in a non-playing capacity. The ground is on a ridge with the pitch along the top  and the ground sloping away on both sides – the pictures probably make it look a little flatter than the reality. We won the toss and batted. The pitch was easy paced and low bouncing as the skipper found out when attempting a pull in the second over and playing some distance above the ball to be lbw. Deepak and Daveski stabilised the innings but after they were out and CK flickered briefly, it was left to two of our ringers, Gary and Glyn, to provide the bulk of our score with a pair of forties. A veil will be drawn over the lower order batting which saw us all out (11 down) for 173.

At this point a proper cricket tea broke out. Sandwiches, pies, sausage rolls, cakes, biscuits, tea and even coffee. My first at a match since 2019.

The second half started with the Skip and Dillan bowling and aside from one early wicket, not getting any luck. A lid was being kept on the scoring rate though and it felt like an even contest. Deepak and CK came on first change, we took another wicket and the rate was still hovering just above 4 an over. After drinks Ian the ringer came on and bowled nicely and finally a revamped Sai was introduced into the attack and began taking wickets for fun. The batsmen retaliated by peppering the short boundary and the match stayed tight. CK finished off with another wicket** and the last over started with 9 needed and 2 wickets left. Tight bowling and a run out saw Balcombe 5 short with 1 ball to go. 6 to win, one wicket left, one ball to go. Another dot from Raj settled it. Salix (with a generous helping hand from Balcombe and CAC) had started with a win.

Regular readers will be aware that there is usually a philosophical bit in my reports and this is it. I thought I would stick it in at the end this time so you could just ignore it if you like. This was a great match against a wonderful opposition played in a wonderful spirit under sunny skies. Really it doesn’t get much better – if you weren’t there, you missed a real treat. I hope we keep the fixture on in the coming years. As I said to the umpire at square leg “It was perfect, I wish I was forty years younger so I could keep on doing it”. But then I’d have missed all those other great days we’ve had so, on balance, maybe not. Still, let’s hope Salix is still here in another 40 years and still playing Balcombe.

**CK’s 3 wickets takes him to 219 for Salix; just one behind some old fat bloke who currently holds the record… 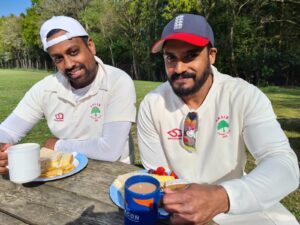 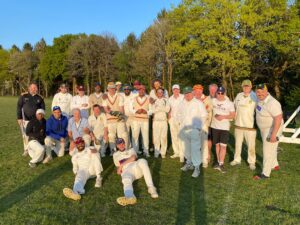