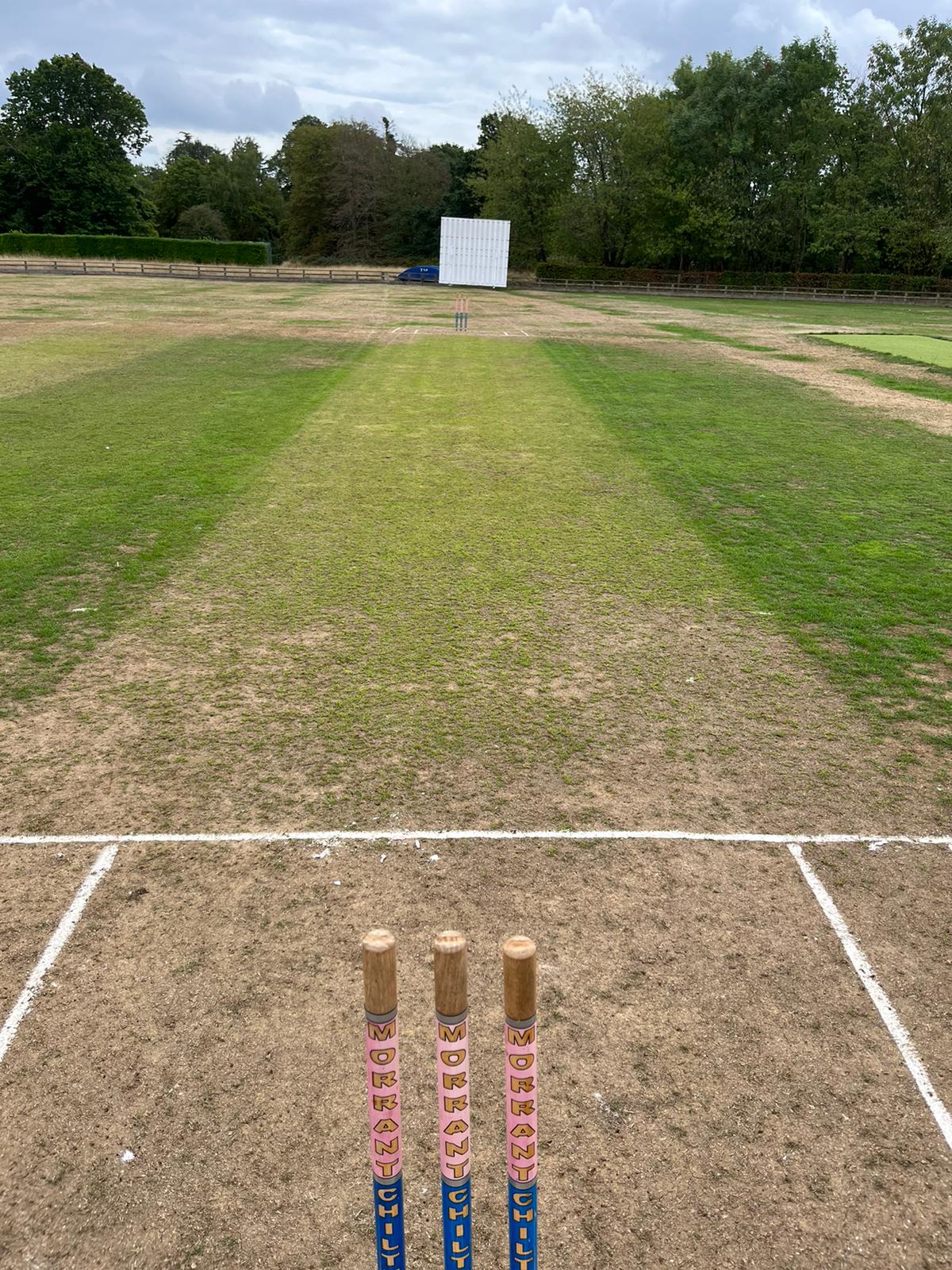 OPPOSITION and VENUE: Jordans at Coleshill

Into September now, the season is drawing to a close and we’re off to lovely Coleshill to play Jordans. What little rain there has been has turned the pitch into something of a green-top, and so, on winning the toss, Elvis decided that we were going to have a bowl.

Our Sliding Doors moment occurred in the very first over when Azfar induced a thick edge which flew between this week’s wicketkeeping lottery winner, Tuffers, and the chairman. From then on it all got rather ugly rather quickly in a remarkably similar manner to our last match at Redbourn. The first two wickets, which fell at 69 and 220, were both to catches by CK at long off, which tells you all you need to know about how it was going. Moreover, your correspondent failed to help restrict the flow of runs by pulling a calf muscle quite early on in proceedings. Meanwhile, Sham had clearly offended the skipper by arriving a few minutes late, and as a consequence had to field at point, which gave him a considerable amount of exercise as the oppo opened with a left/right combo and were rotating the strike with some ease. Some queries might also be made of the captain’s decision to only bring on our form strike bowler, the Red Baron, as sixth change, although Monty might consider this a promotion as he was 7th change in the previous game. Despite this slight, the Red Baron soon nipped out the oppo’s #3, albeit for 82, while one of Jordan’s openers made a fine century. They closed out at 296 for 6 off their 35 overs, which seemed quite a lot.

One of the very pleasant things about visiting Coleshill is that they still believe in providing tea, something which rarely happens inside the M25 post-covid. And what a fabulous spread it was – we all tucked in with relish, even those who are rarely seen eating anything except cold pizza.

As for our batting, somewhat unexpectedly, and again similar to the Redbourn game, we managed not to embarrass ourselves. Given the huge total we were facing, Captain Elvis decided to open the batting with Azfar, presumably feeling that, given the size of the target, we were in need of a hoiky old start… but then proceeded to nudge and block until his true nature was finally revealed and he hit the ball straight up in the air to be caught and bowled. Still (sort of) in pursuit of the total, Arsey came in next and also showed more restraint than he is normally known for, taking several overs to final get into hit or miss mode. With Azfar batting excellently at the other end, while we were a long way from the required run-rate, the scoreboard was ticking over nicely and we reached 85 without further loss before Azfar finally lost patience, swung wildly at a very wide ball, and toe-ended a catch to cover. Shortly thereafter Arsey timed one beautifully, only to be out to an excellent running catch at long on for 35. By this point CK was in and seeing the ball well, smashing 3 big sixes on his way to an excellent 55. Sai, Sham and Rog kept him company and we saw out the 35 overs with few alarms, reaching a normally respectable 186 for 6. In reality we had been comfortably beaten.

Nonetheless, it was an enjoyable day out at a lovely ground against friendly oppo. We’ll see you next year.