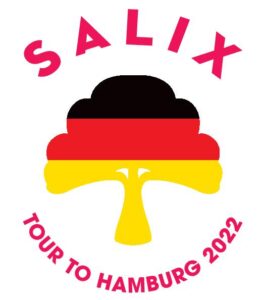 (Photos can be found here)

Salix overseas tour 21, for your humble scribbler number 12, that also being my batting position in game number two, to which we’ll return. Given how long we’ve been doing this having a touring player born after the first expedition surely can’t be far away.

Inevitably, what was once novel and then even actively pioneering into parts of lesser visited Europe has become something of a Salix routine, to pass on to new victims. Travel a day or two in advance, see a few sights or bars, lose the first game badly to a high quality opposition, win a Sunday game against a slightly weaker side, award Arsey either player or cock of the tour depending on whether he managed to show up, then head home thinking of next year’s version.

And so it came to pass, in a weekend of glorious sunshine not wholly typical of northern Germany in early May. But first we should note the outstanding quality of our hosts, who arranged two good games played in high spirits at a ground set in a sports facility with more amenities than we’re perhaps used to on tour, which did so much to contribute to the weekend.

Much of the party had gathered in time for a mini tour of Hamburg by Friday lunchtime, enlivened by Tim and Raj arguing at length over what precisely is art, and then at a Beach Club, Doc Raj surprisingly giving the team a drugs talk of the type he might normally give to school groups. It might have done the trick, this was surely the most sober tour Friday night so far.

Which did us no good whatsoever, as the Saturday game went like so many before, though with some allowance from sporting opponents in terms of their batting retirements and use of change bowlers to keep the difference respectable.

It all started so well, though, a proper full length delivery from Arsey inducing an edge from one of the batters described to us as from the Hamburg 1st X1, a catch from Dozy, and we looked briefly like a cricket team. If we had held any of the five drops from the ensuing partnership of two other first teamers, then perhaps it might have been different, but alas the game started to get away from us notwithstanding retirements.

It should at this point be noted that with the rough dimensions of a football pitch, boundaries to leg and off did not take much effort, so much so that only fours were allowed. Big nets were affixed to keep stray balls from troubling the rest of the sporting complex.

There’s always a way for Salix, though, and thus it was that we managed to concede a six from two runs and four overthrows. Not that we bear grudges from tour games, but given certain retired team members are still arguing about whether they were correctly given out in Croatia over 10 years ago, expect to hear from the bowler of said delivery about this again. Not least because otherwise my figures were rather respectable.

Anyway, the delights of tea gave way to our innings, which had already started to look a little worrying from our latter bowlers were able to induce extreme bounce from the coconut matting on top of flix wicket. Sure enough, we were soon only just surviving some chin music, the runs never looking like clocking up quite sufficiently.

An innings that could have tailed away was revived by an exhibition innings from Arsey up against their seventh choice bowlers, defeat then, but as it turned out as nice warm-up for the second game.

For, not distracted by curry and beer on the notorious Reeperbahn, we were able to record a win, against the Heligoland Pilgrims. Sharper bowling, with the stand-out exception of your correspondent, meant a score we could reasonably chase. Opting thus to umpire the 30 overs as penance, your correspondent was able to witness a splendid first ever opening knock from Ali amidst a relatively solid start. We were still some way behind the required run-rate however when Arsey joined Raj at the wicket. The next few overs of relentless hitting changed the game, as well as the tree to which a rather startled woodpecker called home after the original one sustained a direct hit from Raj.

Victory was ours, Arsey cementing his player of the tour award, while Ollie took the traditional Cock of the Tour award for the slightly undiplomatic incident of expressing words about a new batter to the incumbent, not realising they were married.

A successful tour then, and as this correspondent left the final bar, he turned to see Herr Director Smutmeister talking to a couple of locals, presumably introducing them to cricket. The tour was complete. Here’s to the next!

The lads line up before the game/humiliation commences