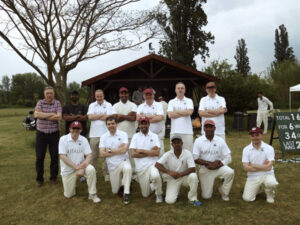 Thats two injured, two OAPS, two who hadn’t played for 15 years and the rest…
Our annual overseas tour returned to its traditional May bank holiday slot this year when we visited the small town of Lodi in Northern Italy to play Idle CC. Whilst we were 12 in the party, only 10 of us could play and according to our new captain CK, we were short on battling, bowling and fielding talent so not surprisingly expectations were low.
It all kicked off early on Thursday morning, when the advance party of CK, Delilah, Nelson, Smutty, Dozy and newbie the
Dribbler met at T5 for the flight to Milan. No, dear reader, the intrepid party were not getting more playing time, but
decided to pre-load in Milan on Thursday before getting down to the serious business of being on tour over the weekend.
Staying in the Canal side district, things looked good when the apartment had free prosecco – lunch included a few more
bottles before the cultural sights of Milan were quickly photographed by Delilah – then a few more Negronis before supper and afterwards a great bar with band and the compulsory pretty girl carry shot glasses who caught Dozy’s eye…fast
forward to 330 am and the strategy for the two games was well and truly sorted.
Friday saw us travel to lovely Lodi – apparently a town having one of the ten best Piazza’s in Italy or is that pizza Siv?,
where we were to meet up with the other team members YM, SteveO, Nurdler, Padders, Tuffers and and another newbie
Big Al – who really isn’t big at all.
Friday night was quiet – after all Lodi is a small town and we have a game to play.Thanks to CK for his captaincy and strategy, Big Al for his contribution and making the trip from his tax haven, Oli for sterling work in the field, Siv and Padders and Smutty’s bat for the runs and the pensioners for their stoicism and belligerence in batting to save the day. Steve for his most accurate scoring and Deepak for the snaps.
No late nights in Lodi, no scandals, some great cricket and a great oppo in a beautiful setting. Our new Captain wanted to
win one match on tour and we did that so the domestic season beckons. Can’t wait. 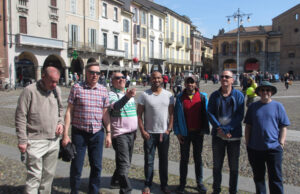