Official Tour Report: visit to Slovenia 15th –19th April 2004
This web page contains the fully sanitized details of how the 13 men and 1 woman of Salix CC ventured to Ljubljana, Bled
and beyond to play cricket against Slovenia “A” and the Ljubljana cricket club, to visit the casino, drink Union beer, visit
the As restaurant and nearly get beaten up for photographing a thong. It is heavily censored to avoid potential divorce
proceedings. In particular the report pays respect to the wonderful hospitality of our hosts in Ljubljana whose first team
used plenty of lubricant in the first game and then arranged for traditional English cricketing weather in the second game
to give us a chance.
Our tour arrived in two groups, the advance party on Thursday (Fletch, Steve-O, Tinker, Swordsman, Clarkster and Oily
James) whereupon we checked out the boozer and the Ocarina restaurant in Bled. The later party arrived Friday: The
Shilling, Cap’n Ben, Dr Dustman, Ginger, the German, QuickSilva, Matt (who surprisingly seems to have no nickname) and Victoria.
As is traditional on these occasions the whole team ventured forth in Bled and got trolleyed in preparation for the next
day’s game. The accountants and others ended up in the Casino where they frittered away the club drink whip on
blackjack.
Game 1
A hungover group assembled at the Hotel Golf to be met by our local player Nixta and his lovely mum whereupon we
ventured to Valburga in rather dismal weather. Losing the toss in a traditional way Salix CC batted first, but not before our hosts had treated us to a lesson in Slovenian. For reasons we can only speculate, many of the Ljubljana team sported
Aussie accents and Slogger and Brad taught us a few Slovenian cricket phrases that I reproduce in phonetic form:
Slovenian: English
Fick : Yes umpire I concur with your decision regarding the nick to the keeper
Fickingfick : poor shot selection on my part
Owthefickis thatump : LBW possibly?
Fickingfickme: that was close
Citchtheficker: A chance boys!
Newfickingbit lidz: Next man in
Facing some very tasty bowling the Salix lads plodded away. Men of the batting were clearly the German who ground out
38 hard won runs inc 4 sixes and Cap’n Ben with his 22 in 1’s and 2’s. The strength of the bowling can be judged from the
fact that Brad got 3 for 14 off 7 and Ryan 2 for 9 off 7.
After a very nice lunch our bowling attack took the field and although we bowled tidily and quite well we never looked like
hitting the target. A magnificent catch by Oily James (dutifully earning him MOM) saw their opener disappear and
Quicksilva showed a good turn of speed but slowly the opposition ground us down with Captain Mark hitting 50 not out
and they won by 7 wickets in 28 Overs. Still at least it hadn’t pissed down with rain, he said speaking too soon
Game 2
Following the Saturday game there was strong resolve in the team that we needed to regroup, take it easy and stay
focused for the next match. So the team boarded a minibus and shot off to the Restaurant As in Ljubljana. Now luckily I
was not there so I cannot report in detail on goings on. But I may report that one team member was incapable of raising
himself from his bed next day, one took some “Candid snaps” of Balkan underthings, one was threatened by a local ladies
boyfriend and several more looked to be in Zombified state through vast consumption of Union beer. Big up though to
Ginger who mutated the clubs gambling whip from 16 euros to 42. That’ll buy the team a few balls.
In the exact opposite way the day dawned bright and clear and then it came on to piss down. Salix CC lost the toss again
and fielded first (in mainly dry weather). Certainly our bowling attack had more drive and we kept the opposition down to
141 for 10 off 35 overs (we were playing 12 a side). The Shilling got 3 for 12 in 3 and Steve-O got his 100th wicket for the
club pretty late on thanks to a nice catch from MediumSilva. We did manage to drop 6 catches on the way. But hey. After
a truly exceptional lunch the opposition fielded in a heavy drizzle and thanks to great innings from the Clarkster and the
German we got their total with two Overs to spare. Innings highlights included the by now Quicksilva hitting the biggest
ever six across the main road and into a field (lost ball). Over beers by the lake afterwards it was confirmed by the
Swordsman that he would have hit his farther if he had connected…
And so game over. And back to Bled and out for a Chinese then on the Casino and then Ryanair home
Summary.
Big thanks to the Slovenian Captains Mark and Alistair and everyone for such great hospitality. Ever year the Salix team
reckon that the overseas tour couldn’t be better and ever year it is. This was fabulous hospitality and great sport from
great hosts: if you want to take a team overseas then go visit Slovenia. As Bradley might have said “itzgotthe
fickinglotmate” 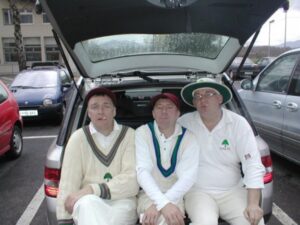