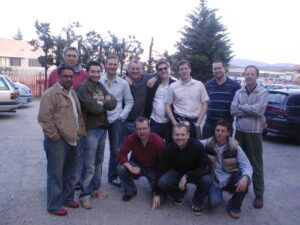 Italy 2005 – Match Reports
Saturday: Although Euratom had lost the original pitch for the day, the match was able to go ahead after the portable mat was laid on the local football pitch of A S Cadreazzatese. And pretty well it played too, although it clearly needed a good going over with the Hoover after, given the amount of mud. Salix CC batted first and comedy opener yours truly was straight in and out but the proper players soon got stuck in, an especially bright 50 from second oldest man on the tour Chazza setting us up well, ably supported by Capn Ben. Retiring to let the young un’s have a go was however clearly a bit of an error…
After tea, our fielding resembled a juggling master class for people with no motor skills and their man Sumit laid in with a 70 not out to see the hosts cruise to an early victory. Speaking of cruising we hope that Mr Purple will be removing his comedy face fungus shortly to avoid the attentions of overzealous Milanese sea faring folk

Sunday
Bracing ourselves for bad weather news, we were still surprised at the downpour on Sunday morning. A one hour aquaplane class up the autostrada to Lodi saw us hone our Italian driving skills and test our waterwings. As we stood in the deluge at the toll booth waiting for one of our hosts, Joe, it looked like there was more chance of the Sworsdman being asked to form the new Italian Government than actually playing. But then a miracle as the skies cleared, the ground dried and we actually played. Again we took to the field first and made sedate progress on a wicket that suited the slowest of slow bowling.
This time the German took over from the aging Chazza to hit 50 and by tea we had amassed a lowly score. But what a tea. The club might be called Idle, but this is a total misnomer in the nosh stakes. High spot for me, the Parmesan Regianno from the actual farm we were playing on. and so back out under lowering skies and great bowling from Mr Magoo and Ginger saw our host edge towards our target only slowly, with the game MOTM Sunny hitting 44, ably assisted by Landi. And as the last ball was whacked the heavens reopened, and stayed that way until we had jetted of by Ryanair the next day. Truly a weather miracle, Holy Cardinal Michael Fish we bow to you and your pagan isobars. 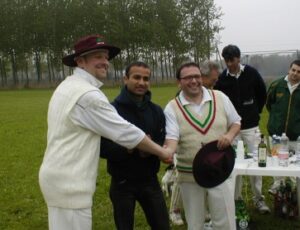 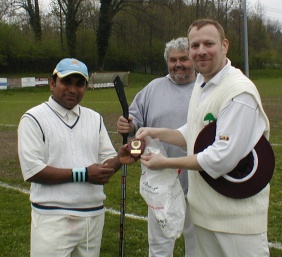