Assembling at the hell that is Stanstead on full security alert, the Salixites plus the Mighty Wanderers jointly assembled
for a three way tour to Guttsta Wicked CC, the most northerly permanent cricket ground in the world and one made
famous in the Rainmen.
For what must be a unique occasion that fact that Ryanair- Stockholm is nearly 100 miles from Stockholm was a big help
to us as we flew to Vasteras and then a quick coach ride to the little village of Kolsva. Whilst most of the lads had stocked
up on beer and fags, we had also brought the weather with us, and sadly intermittent and sometimes heavy rain
continued nearly all weekend. Considering the massive amount of work that the Guttsta lads had put in to make us all
welcome this was one severe kick in the googlies. But hey, that’s why Captain Ben bought his anorak.

First off we kicked off with a game v the MWs, where the Swedish ringers, Lars and his Bro Jan continued their mullahing
of our bowling. Only the fact that their bowlers conceded a monstrous 60 extras helped the scorebook look somewhat
reasonable. Still the event was captured by Swedish TV (mad people in white cavort in rain etc-)

Well, no cavortings on this tour as Kolsva is a tiny place that barely boasts a boozer. We did see a few Elk though and our
hosts regularly took the Volvos to the State liquor store to keep the boys topped up with Swedish beer and the barbie
never stopped. The event was rounded off with a prize giving and a game of 5-a-side where the Salix boys took the boot
to the MWs and ran in 5-4 winners.
We are all winners Well actually we aren’t but hey: Man of the Tour award and a rather nice Swedenish medal went to CK1 (who graciously donated the crappier of the two to Les) and for the 20/20 game to Flossie. The Ginger Express also picked up a gong.

Some Thanks
A big up to Hans who singly handedly has carved a ground that Lords could be proud of out of the virgin pine forest, and
to all his colleagues who cooked barbies, got beer and were generally all round excellent chaps. And young Elton too. Only
9 but with the maturity of a much older person (e.g. Rog). 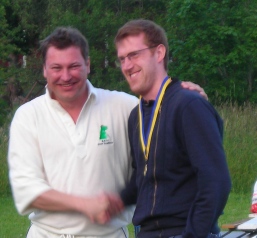 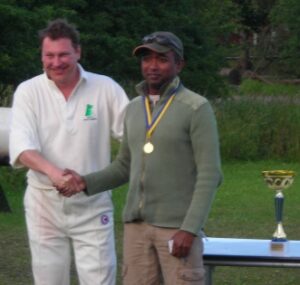