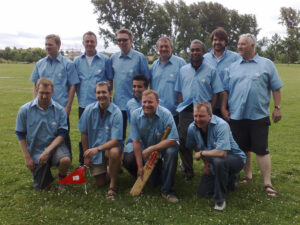 2008 Ghent and Lille Tour Report
Across the weekend of 29/20 June 2008 we ventured to Ghent for our 2008 tour. We were minus the Toffs who had to go
to a wedding or something, but bolstered by two Salix tour virgins, Padders and Jesus, and a guest appearance by the more talented Dutta brother. We stayed in the Holiday Inn Express Ghent, not a hotel with bucolic charm, sandwiched between 2 motorways, a chemical factory (remarkably called Sailex) and a hospital, but one very easy for a quick cab into the lovely environs of that old medieval city.
In traditional style many of the younger members got mullahed on the Friday but that didn’t stop us setting off on time for the Saturday game versus Lille CC.

This game was played in the English gardens of the beautiful Parc des Jardins on a Flickx wicket, which actually played
pretty well. We batted first and our openers sadly succumbed without troubling Steve-O the scorer, but President Elect Ex
Captain Ben stiffened the sinews along with the German (before he fell to yet another LBW) and then Padders. At tea 122
for 9.

Some rather spectacular bowling (esp from Padders) saw us cruise to a fairly comfortable victory. MOTM Ben for his
grinding 43. Post match we all retired to a rather nice beer tent thing prior to wending our way back to Ghent (all except
Chopper who really does need to invest in a state of the art Sat Nav). Saturday night saw a team meal at the Old Clock
restaurant followed by mass indigestion in the more elderly team members and the hard core out clubbing.

Sunday dawned bright and hot, and a noon start allowed for multiple lie-ins as we went to the Arcadians CC ground, this
time a permanent Astroturf strip in a lovely park. Batting first, Padders was the clear big hitter (surviving nearly 25
dropped catches) and was ably supported by the middle order (the German amazingly not being out LBW). 178 looked on
the low side of defendable and the match was very evenly balanced for much of the second innings as our bowlers strove
to keep the score down, however it was not a strip suited to the slow bowling style of a couple of the lads and some big
sixing from the Arcadians saw this one go to the wire, with them requiring a couple to win, nine down with just an over to
go. A monster six saw that end in their favour. Man of the Match Colin Walker of the Arcadians for his not out 77. 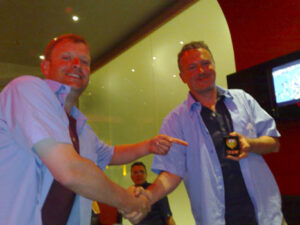