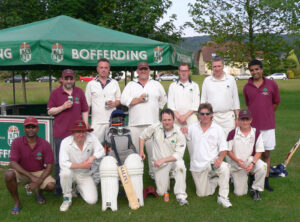 SALIX TOUR REPORT By the K-Man
“AAAAOWWWW!”. This wasn’t another substandard Michael Jackson impression. It was the sound of Dazzler being kicked in the bollocks by his team-mate before even a ball had been bowled.
Such miscalculated tomfoolery could mean only one thing: the Salix Boys were back on tour. Clad in shirts of passport maroon, clutching an abysmal touring record and over 250-years of collective life experience, West London’s finest were
once again out to make continental cricket look good.
The opposition sensed the advantage from the off. “Heavy night, last night?” the Optimist’s skipper enquired, pointing to nine Salix staff lying lifeless on the grass. He wasn’t wrong. Even Andrew Symonds would have struggled to keep pace with the Swordsman the previous night, whose deadly concoction of collapsing Amaretto cocktails had locals gasping with shock. “Your German friend, Swordfish, he such crazy!” remarked a female onlooker. It would set the tone for an extended night of revelry, involving an affable Berlin Neurosurgeon, a self-appointed Irish teenager hurling abuse, Billie Jean on loop, and a 4am return to base.
Credit then to the “Oil Tinker”, who blocked out the previous night’s drama and histrionics, to show Salix had more between them than beer and cigarettes. Instead he and The Nurdler opened the innings admirably, with some rapacious cutting, and running between the wickets reminiscent of Inzimam Ul-Haq. “Tinkers got 49 walks,” came the commentary from the dugout, as he finished agonizingly short of a half-century (an effort that earned him man of the tour). With help from The Nurdler, Salix were off to a tidy start, generating predictions of plus-200 by the end of the innings.
It wasn’t to be. The combination of slow bowling and a trampoline of an artificial wicket proved too enticing for most of
Salix’s Big Gun’s, many of whom lobbed unforgivably easy catches around the field. Salix’s lack of spin also hurt, with too many stock deliveries smashed around the field. Credit to CK1, whose performance of mixed-pace backed up Steve-o-o
and Padders toiling efforts nicely, while VCGC’s 25cm run-up continued to ratchet up his wicket tally. The Dazzler (known
henceforth as “Stu”) also plucked a sensational catch in the deep, one highlight in an exemplary showing in the field all
weekend. Sadly, it wasn’t enough.
Nothing better to take the edge off losing your opening tour game than a show of outdoor women’s wrestling. Sadly, that
wasn’t an option. Instead, the next best thing: female rugby – part of the opposition’s post-match hospitality package,
replete with band and BBQ. Highlights included cover versions of “Take My Breath Away” (something the four-piece outfit failed spectacularly to do), and the ‘Michael Jackson tribute salad’ – daintily served-up by the chef with one glove (is this, one wonders, what gave Yesterdays Man the most runs he got all weekend?).

Eager to claw back the advantage the following day, CK1 led the charge, crafting a thoughtful 74, the highlight of an otherwise tantric (often torturous) batting performance that elicit cries of: “it’s not a test-match, lads”. With the Optimists bolstering their team overnight with some heavy-hitters, a sub-200 score was always looking too few – even given my blind umpiring and numerous drop-catches that granted second lives to several Salix batsman. The scoreboard completes the story. With their Middlesexcredentialled batsman busting a ton, a bowling line-up that failed to penetrate, and numerous drops from some of Salix’s most unlikely suspects (you know who you are), the Optimists soared to a convincing victory. Thank goodness, then, for the one universal highlight of the day: lunch – including Indian Kedgeree that my late grandmother (God rest her soul) would have struggled to make as flavoursome. “Thanks for coming all the way here,” the opposing skipper said in his victory speech. “You’re all welcome back to Luxembourg any time.”
All in all, another frolic-fuelled tour. Though one wonders how long will Salix’s hungry young Lions can continue allow this “Jamaican Bobsleigh team” mentality to continue? At time of press, VCGC could not be reached for comment. Sources say he was last seen muttering angrily to himself, while clutching a draft manifesto entitled “The Night of the Long Knives”.
Meanwhile, when presented the Tour Weakest Link medal for kicking Dazzler, Yesterdays Mans response said it all. “If I
known I was going to win this, I’d have bought myself a better one.” 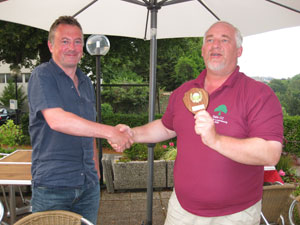