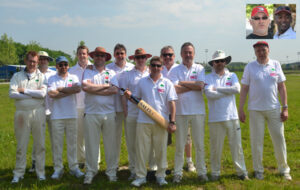 2012 Tour to Serbia.
We of course go by the maxim, what goes on tour, stays on tour, so this report is brief and to the point. We went across
the weekend 5/6 May 2012. We were guests of the Serbian Cricket foundation, tremendous guys who have done everything to get cricket going in Serbia. The main games were played at the Sports Centre in the grounds of the luxury Hotel President (about 15 hair raising minutes in a cab from town). We played several games: on the Friday a game in the Park versus the BeoAsian Assassins (which we lost, and is not in the official stats and on Saturday and Sunday a round robin: Salix CC, , Beograd XI and Dunabogdany CC (the Hungarians who we played last year and who braved a ten hour train journey and all the lager that entails) to come over for the weekend. Two T20 games on the Saturday, one on the Sunday and the weekend finished with a mixed up set of teams having a 25 over game (again, not in the book). The Salix CC men of the tour were Arsey and Swordsman, FoCGC the Weakest Link, I think, and CGC got a whopping trophy for being a leader of winners.
Luckily our Captain did not have to give a press conference like the Quokkas… if he had, though, we are sure he would
have been fulsome in his praise of the meat sandwiches. Joking aside, we would really like to thank Haris, Vladimir,
Slobdan, Dmitiri, Maggie for the scoring and everyone who worked so hard to give us and the Hungarians a fantastic
weekend. 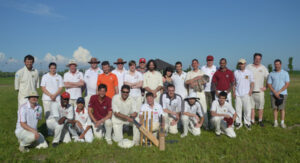