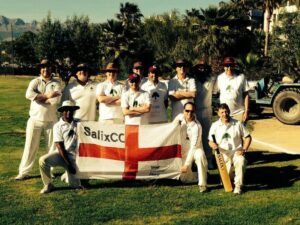 2014 Tour to Alicante
We of course go by the maxim, what goes on tour, stays on tour, so this report is brief and to the point. The tour was the  weekend 2-4 May 2014, versus the Sporting Alfas.
Report by Steve-O
For our 14th overseas tour we decided to go back to Spain, the country where it all began. We had two 40 over games lined up with Sporting Alfas in the small town of Albir. Whilst it is located less than ten miles from Benidorm it couldn’t have been less Benidorm like – no kiss me quick hats or drunken pugilist Brits, the tourists mainly hailed from Holland and Norway. We had 13 confirmed for the tour and one possible (Vicky who never did make an appearance) and one who had to leave Sunday morning to get back for a family event. We also had one with a bad knee who went along to score. As it turned out we only had eleven players for each game as Arsey made an early bid for cock of the tour by missing his flight.
The advanced party arrived Thursday morning only to discover we’d been bounced out of our hotel due to them hosting 1500 school kids who were playing in a basketball contest. As it turned out the alternative accommodation offered – the Albir playa apartments – were better than the hotel and more convenient for the cricket ground. And so the endless round of eating and drinking commenced, interrupted by nets on the Friday and of course the games on the weekend. Whilst the scorecards do actually tell the whole story – we were walloped twice – I should point out that this team were missing two of their players because they were playing for Spain and that Sporting alfas had won the Spanish league for the last two years.
The ground is stunning, surrounded by mountains on two sides with a decent outfield and an artificial strip that plays true if a little bouncily. The facilities are great with a bar and proper tea ladies; the oppo were incredibly hospitable and both games were played in a very good spirit.
And so when it was all over the general consensus was a thumbs up and even a few “best tour ever” comments. I put this down to the beautiful weather, the closeness of the ground and the drink. 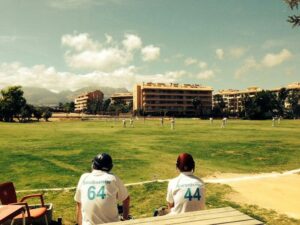 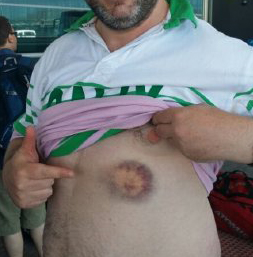