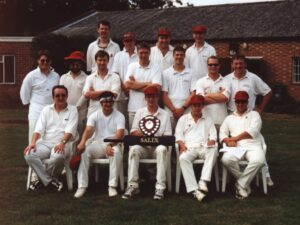 As a wave of democracy has swept the team and we now have a Committee, yours truly will have to try to get elected as Director next year I suppose, so this is my penultimate missive as non elected despot (some say patriarch others say Benito someone..)

The day dawned rather sunny (although it got a little chilly later) and kicked off with a committee meeting chez moi, where various ingrates sought to depose the once mighty ruler of the team (That King of Nepal seems to have had it taped if you ask me). Anyhow after cafe latte and pain au choclat we moved to Glaxo where most of our members actually turned up on time, plus a couple of ringers and there we were 22 fighting fit young men in white. We duly gave out the prizes etc (see here for full details) and the game commenced with Cap’n Shaw losing the toss to Cap’n Clarkster and going into bat.
The Shaw XI got of to a pretty fast start with Matt and Robert OE, and when Irwin came in at 3, who could have prophesied that he would hit a cracking 31 before getting bowled. That’s three times as many runs as he has scored all season. A fabulous performance. Then Jeremy Hogben strode, like a colossus, to the crease and whacked off a rapid fire 67 before retiring. Cap’n Ben was c and b by the Honorable Administrator in Chief , Mr. Henig, for a miserable 10, before Fletch completed his round of ducks of the season, was caught behind by the Lurpak award winner, Mr. Spillane. Oh the irony of it. However ringer Phil then bravely stepped up and whacked of an unbeaten 51 before we broke for tea at 207!
Truly the Clarkster bowlers labored mightily to not much reward, Mr. Bush, clearly hung over and in some pain got not a lot of wickets and indeed Andy Foster had the best figures. But it looked doable, if only just. Buoyed by wining the raffle Mr. Henig and Mr. Spillane opened the innings and Mr. H was duly out for a duck, in time honored Salix fashion, but New Dom accelerated away to fast 51 and retired, ably supported by Alex and the Clarkster (also 50 and retired). By about 25 Overs it looked like they were in for an outside shot at winning, however they still needed 7 an over. However step forward El Director who got 4 wickets in 3 Overs and also ran Old Dominic out (great throw from Ben) and it was curtains for the Vice Captain and his merry men.
Sadly, the long term convention is that the stats for this game do not count in the years figures, which is a shame really as we had:
4 x 50’s – all of whom retired unbeaten (Jem, New Dom, Clarkster, Ringer Phil)
Fletch getting a career best 4 for 35
New Dom (Lurpak award winner two years running holding not one but two catches) and a magnificent innings from the Zimbabwean Love Machine himself.
But there’s always next year.

Captains Report
2001 has been another thoroughly enjoyable season that was kicked off with a great tour to Spain. It looks like the international tour is going to become a welcome feature of future seasons. The Club continues to thrive with a host of new players joining this season and a growing band of regulars, this is important for the future success of Salix.
Success on the field proved to be a little more elusive this season (played 16 won 5 lost 9 drawn 1) however, there were some memorable games. We three times scored around 250 runs in an innings, including that thrilling game against Freewheelers where we were chasing 250 to win. Batting highlights include Paul Rogers scoring the most runs, Alex Newton for getting the highest score in an innings, Dominic Spillane for his 68 against Freewheelers and Andy Bush for getting so many NOT OUTS. There have also been some impressive bowling performances. Of note Andy Bush’s 2 for 8
against the Mighty Wanderers and Fletch’s 3 for 12 against the Presidents. Other bowling highlights include Steve Jacobs’ haul of wickets and Mike Ellis’s strike rate. Sadly our fielding has really let us down this year, how much better would the figures of our bowlers have been and how many more matches would we have won, if we had held more of our catches?
The dropped catch league speaks for itself!
I hope 2002 will be as much fun as 2001 and it promises to get off to a great start with the tour to Bordeaux. Let us hope we hold more of our catches and win a few more games.