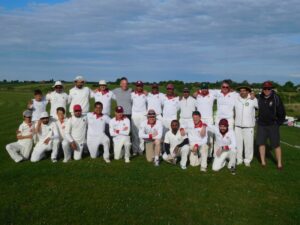 It had been five long years since I’d last toured with Salix, missing trips to the farthest corners of Europe as Salix
continued its mythical odyssey of finding the lost team of Continental Sunday players worse than ourselves whom we might easily beat. During that time some scant success had come our way, but mainly the results had been the same and
frequently had we had our behinds presented to us on a plate, usually accompanied with a side order of rain.
Would Romania prove any different? Fat chance. Most of the boys turned up early to tour the provinces and visit
Dracula’s castle and the rain too came early to keep them company, whilst those back home bathed in blue skies and
polished up their porcine tans. I wasn’t actually there for the tourist trail, but with the wonders of modern social media
and a distribution list from which I felt unable to escape it felt like I was with them every step of the way: there was a
speeding ticket, pork knuckle, rain, something else unidentifiable on a plate, a clamped car, rain, a bit of thigh and
nobody being where they should be when they said they would be.

When I arrived on Friday night it was gone midnight and I did my best to catch-up with a team that had been drinking
since dinner. Sadly I succeeded and most of the evening or morning is a blur. My roommate Prash fared similarly and a
lost mobile phone went hand in hand with his errant dignity. It was therefore with somewhat mixed emotions I received the news that the rain had done too much to the ground for us to play on Saturday and the first match was cancelled, with a promise to play a 35 over game and a T20 on the Sunday.

Some of the boys did the cultural bit and visited Ceausescu’s Palace and eventually everyone settled in an Irish pub for
various televised sports and Tuffers left happy, Quicksilver less so. Sunday brought some sunshine, perhaps a little too much for our skipper and our tour organiser both of whom had made myself and Prash’s mistakes of the previous night. We took the journey North to the rather pleasant surrounds of Romania’s cricket ground, a work in progress next to a pretty little lake and village. The progress is a rather large oval with a good artificial wicket and a smooth outfield, with future plans for a pavilion, some seating and more facilities for the academy of which there are currently 150 Romanian boys enrolled.
If it sounds like I’m taking too long to get to the actual details of the match, well, it wasn’t pretty. Put into the field after
the Romanian Bears, a combined team from the Romanian league, we struggled initially to find our rhythm and it was
clear early on that the Bears had some talented batsmen. I managed to eek out both openers, one courtesy of a nifty bit
of stumping by Dozy, the other LBW, but all that did was bring in their number 3 who hit one of Bad-Mo’s first balls for six with such insouciant ease that you it looked as though he’d only tapped a single.
Bad-Mo did recover, cleaning bowling a couple and Tuffers took a remarkably sharp caught and bowled with such relaxed
grace that it earned him the champagne moment of the tour (payable with an Ouzo rather than anything fizzy) so at one
point we had the opposition at 125 for 5 and that fickle mistress of optimism showed a little thigh, before it was thoroughly stamped out by the Bears’ no. 6 who hit a succession of sixes that not only cleared the boundary rope, but the
top of the surrounding bank around the field.
At the end of a torrid innings we were left facing a total of 290 off 35 overs, which even without hangovers, lack of sleep
and a suspicion of failing fitness, would be a tall order and certainly one of our highest scores in the club’s history. The
score books tells the tale itself. Only Daveski looked particularly comfortable and even he succumbed in the end playing
an uncharacteristically rash shot. When extras are the highest scorer you know you haven’t distinguished yourself and
the only solace for the skipper was surpassing the evil of 59; at 20 for 5 it was looking a distinct possibility.
Having beaten us soundly the Romanian Bears kindly agreed to mix up the teams for the T20, which made more of a
contest of it. The particularly highlight of the match was each side taking on one of the younger academy players and it
was a pleasure to see how much they enjoyed the game, how much skill they displayed and how much you could tell the
opposition team had invested in them and wanted them to succeed. Both of the lads played very well and one would
have taken an excellent catch at mid-wicket if a couple of our umpires had interpreted the waist-high no ball rule a little
less aggressively. You know who you are. Destroyers of dreams.
A final dinner at the hotel included a birthday cake for Daveski and some awards – Prash got cock of the tour for his Friday night antics, Tuffers the moment of the tour and I picked up man of the tour because there was no one else to give it to.
Despite BA’s troubles the team all made it home safely and I think it fair to say that everyone had a particularly enjoyable
experience despite the thumping. There’s something very comfortable about a Salix tour and I didn’t realise how much I missed it until I was there again.
Thanks to the Romanian Bears for being charming hosts and an extremely personable bunch of guys. I’m sure they’ll keep
up the good work with their academy and in 20 years I look forward to a drubbing from their protégés.
A final note of thanks to Tim for doing all the organising, the hotel choice in the heart of Bucharest’s nightlife a particularly inspired choice, even if it didn’t really help the cricket.
Elvis 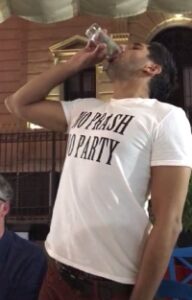