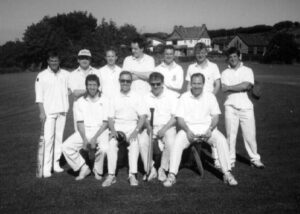 We stayed in the worlds worst hotel. There was an almighty row over whether the Captain should have a giant room all to himself (that’d be Rodders) whereas Chazza and someone else were forced to share a tiny double. There was also no reception on mobile phones which caused the Patchett some huge consternation. I also remember someone planning coming on the train, however Beeching had closed the line, which was not clear (Dicky W I think). Personally I was sharing with Joe W who was very keen to “large it” up at the local Butlins, but went for a little power nap after the game and didn’t wake until the next day. ha ha. That said someone got their own back on me: they stuffed a half eaten kebab
under my car seat, which did not come to light for more than a month…

The team being: Nick Patchett, Iain Kiernan, Andy Shilling, Charlie Hewitt, Fletch, Mark Barrott, Rodders, Joe “The Turd” Wilkes, Irwin Sarif, Richard Winter, Robbie Eberstein plus a couple of peoples mates.
Cutcombe CC where they whacked us in an after work game on the Friday night. And then we nearly got done over in a pub… Lords Tankards: If I remember correctly this was the pitch with incredibly short boundary and the team with the 100 year old bowler. The day of the “Floater” incident. which we won’t go into here And he got a duck too, even after his
power nap. 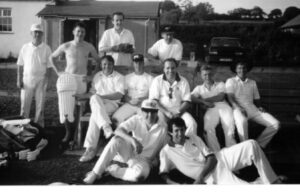