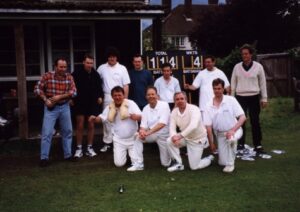 Again no written records. I think we went to Aston Villa to play an indoor game on the Friday night and the Malvern boys took us to play in the grounds of a wonderful abandoned country house. (later Edit: The house is Croome Court at Pershore – now a National Trust Property (see here) – it used to be owned by the Moonies or something (Hari Krishnas in fact..). It looks like the cricket pitch is long gone, sadly. We played on the front lawn. Sadly the heavens opened and there was a massive thunderstorm and were rained off. This was again a 20 x 20 over game with Salix 1st 90 all out and 2nd 41
for 0. Our Captain, Dominic hurt his ankle, tripping over the car seat belt as we arrived, which was not a good start, however later we all went and played pub bowls which he won from sitting in his chair, so it can’t have been that bad…
We then played the Clogs who had got a new pavilion from the Lottery. We got our revenge this year!