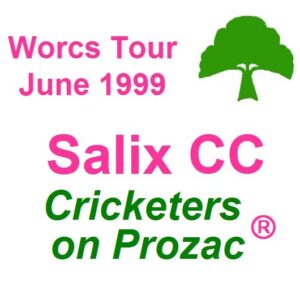 This year’s tour began as last years with a trip down the M40 on a Friday afternoon, accompanied this year by Richard Winter, the Radio 5 Live commentary team and Australia v. India from the Oval. The trip passed uneventfully with the highlight being some dimwitted Australian commentator trying to say that taller bowlers had further to bowl due to said height and therefore the ball would arrive more slowly… but I digress.
Each year I find it odd going to Villa Park to play cricket and despite the World Cup the local residents clearly do too as ours was the only cricket match being played. Graham Comfort turned out a similar team to last year – half seasoned indoor veterans and half newcomers to the game, and we too had pretty much the same team with Neil Clark replacing our Dutch prodigy Jaap Bijsterboch.
Once again team spirit was boosted by an official tour shirt (currently changing hands for a rumoured £10), and this spirit showed in the field as we performed with an alertness previously unseen by a Salix side. Amongst a series of great wickets we had four or five direct hits and took some great catches, notably Andy Bush fielding at very silly mid-on/suicidal short leg catching Graham Comfort and leaving his team mates, not to say Mr Comfort speechless.
We were set a target of 7 in the first game which we reached and kept clear of for the rest of the game, the only remaining feature of note being Tony given out for Salix’s first ‘obstructing the field’.
The return match was considerably closer as we set them a target of 84 and with the final over to be bowled they needed only ten or so runs. Cometh the hour cometh the man, Richard Winter looked surprised to be offered the last over but he bowled a mean line with some good bounce to leave them requiring six from the last ball. They failed to get it and we left the pitch unbeaten with an 84 – 81 victory. A swift curry followed and we trekked down to Malvern.
This year we were in a new hotel and Mr Winter had warned us in Birmingham that the AA guide rated it as only a 66% (apparently not a good score) However at 11:30 anywhere that will take us in and give us a beer is fine in my book so we drank our pints and went to bed. The next morning dawned with Richard opening the curtain on a beautiful sunny day and we ventured downstairs for breakfast. As always the redoubtable Mr Shilling had been for the papers as apparently he can’t have breakfast without them so we had the opportunity to read the previews of that day’s rehearsal (he had been kept up all night by his roommate breaking wind..Ed) for the final South Africa v. Pakistan and we all dreamt of emulating our favourite players – Andy Bush with visions of the pace of Shoaib Akhtar, Neil Clarke with the hopes of a Cullinan-esque innings and Mark dreaming of Inzamam ul-Haq and wondering how many of us he could run out in two games.
The morning was spent either climbing the English camp or heading into Malvern for a rendezvous with the cashpoint to pay off Fletch for the T-shirts. By lunchtime most of our missing players had joined us and the full tour complement bar Dave the Actor head off to Colwall for a pub lunch before the real tour games get underway. As we ate our way through our sandwiches the opposing team joined us and brought with them ominous clouds. By the time we had reached the pitch and were ready to start there was a permanent drizzle coming down.
But the Salix team are made of stern stuff and we set about finishing the game of as quickly as possible to avoid last year’s disappointment of missing a win due to the weather. Fighting against unpleasant weather which stubbornly refused to get any better Andy Bush and Andy Shilling both bowled admirable opening spells holding the Chasers scoring in check while taking the occasional wicket – giving no indication of the devastation due to come with the arrival of Mr Goodwin at the School End.
Coming on first change for Andy Bush, Dave returned figures of six overs, three maidens, five wickets for nine, the 4th best return of any Salix bowler. The Chasers crumbled under this assault of medium paced variable line and length bowling to be 52 all out. Once again the fielding performance had been very good with all four catches offered held and shared between Mr Hewitt and the captain.
Tea was taken under a nearby piece of shelter and it became clear that the Chasers were banking on the afternoon being rained off to provide a second successive no result that left us grinding our teeth. Mr Shilling in particular fancied a crack at them in the afternoon and after a couple of false starts they were persuaded to take the field. However only a few overs into the afternoon session, with Mr Hewitt the only casualty bowled for 1 in (in his thoughts) dubious circumstances, the rain increased and the match was abandoned with Salix 13 for 1.
We adjourned to the hotel for showers and a quick beer all round before driving over to the Chase pub for the evening’s entertainment. Little did we know that the great hospitality shown to us there, the beer drunk, the spoofs lost and won and the chinese food consumed were but a preamble for our return to the hotel where one of the world’s worst bar singers was holding court. A swift Bushmills all round and Mr Clark was demonstrating why his choice of ‘groovy pants’ wasn’t
quite as out of place as at first thought.

The night went downhill from there with more beer drunk, silly drinking games played and the eventual retirement to one of the rooms to drink half a bottle of gin. Various conversations about the state of the team ensued resulting as I recall in the view that we have a great side we just don’t play in the right positions.
Sunday dawned with the classic 9:29:59 arrival at breakfast, a sunny start yet again although today’s personalities were showing more restraint than they had the previous evening, the only casualty being Mr Clark who found that a plate of scrambled eggs, mushrooms and tomatoes did not coexist with the spirits of the night before. Before we knew it it was lunchtime again and we adjourned to another pub in Colwall to meet our needle match opponents the CLOGs. This game holds an interesting place in the calendar as it is the third time we have played and each year the team elders get more wound up about it.
To be fair the CLOGs were as offensive as ever with their stubborn denial of ever having been beaten despite last year’s Salix victory. Those feeling strong enough had lunch and once again as we finished the storm clouds loomed but apart from the odd brief shower we could play through the afternoon. Colwall Cricket Club is a major player in the Worcester leagues apparently and as a result had received Lottery money to build a new pitch next to their current one, as long as it was shared with the other local sides.
Thus we found ourselves on the flattest pitch I have ever seen, although we were again playing on the artificial strip due to the recent rain. Having won the toss again we decided to bat to give those batsmen present in the squad the chance of a game. However the CLOGs insisted on playing a frustrating 30 over everyone bowls three overs game, where you had to retire at 30. Mr Clark and Mr Winter opened the batting and performed admirable with them both making their thirty and coming off just as the pace needed to be raised a touch Mr Hewitt and Mr Lock then both did their bit putting up 15 and 20 respectively. Unfortunately Irwin was out for five after taking his captain’s shout from the boundary of ‘run them up’ too literally and was run out.
Mr Fletcher made a quick fifteen, Mr Rodbert was given run out in controversial circumstances before Mr Bush and the captain saw the side home at 140 for 5. The umpire was generous enough to give the first ball as a loosener rather than a wide, but not as generous as the batsman who chipped the second ball to point 0 for 1. Oh how the captain wished he could keep his main bowlers on, but the time came to introduce the ‘occasional’ bowlers. First up was Mr Rodbert who is more confident of his ability to bowl than any of us who have actually faced him and by the end of his spell we were none the wiser as his return included 25 runs at least eight of which were wides but also two wickets – more than any other bowler in the innings.
And so it continued with the varied returns from the side although only Neil Clark and Tony Brown failed to take a wicket.
Vying for meanest on the day was Mr Hewitt with 2 overs, no maidens one for two and the captain with two overs one maiden one for two. On the fielding front again the Salix side performed admirably with the captain missing two hard chances but Mr Fletcher, Mr Wells and Mr Bush holding chances. Mr Bush in particular deserves a mention for taking a catch at leg slip that, just like on Friday night, he had no right to hold. The CLOGs were all out for around 120 with five overs to go and were as magnanimous as ever in defeat grudgingly awarding man of the match to Mr Bush.
In all a successful tour which was a copy of last year’s with three wins and one match rained out from a winning position. On reflection the man of the match for Saturday’s game would be Mr Goodwin for his five wicket haul, and on Sunday I would give it to Mr Winter for a great base to the Salix innings with 30 not out and a good performance behind the stumps. Man of the tour went to Andy Bush for a good bowling performance and a truly Jonty style performance in the
field.
Dominic Guinness