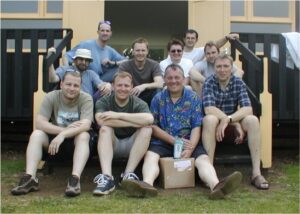 Report : And so on tour again with Captain Bush
Pursuant to the normal cock up re start times, school sports day and the like we finally kicked off versus a rather depleted Chasers pub team at 4.30 on a glorious sunny afternoon at the Downs school pitch in downtown Colwall. As the Chasers
team had little knowledge that the match was going to take place and many were ensconced in the pub anyhow, the game was a touch one sided. Sportingly the Chasers asked us to bat first and there came a contest to see who could get
to 30 and retire the most reliably and quickly.

Everyone managed this task except yours truly and Bog Brush Spice (who whilst looking thinner and more agile was sadly without his checked tour trousers this year.) The Chasers put up a good try, but if it hadn’t been for their man Mike who
retired and came back to get the games highest score of 40, it could well have been Ireland versus the West Indies in 1969 all over again (The WI were bowled out on a soggy pitch for 25).
And so it was back to the Colwall Park Hotel for an early bath thence to the Crown boozer for food and traditional drinking games. Bunnies proved a clear favourite this year, with the thumbmaster falling sadly out of fashion.
Sunday dawned bight and clear and with the hot team of yours truly and Mr Rayner whacking Dumb Bunny and our new star find Pete at Croquet, it was off on the long trek to Malmesbury and beyond, where we found a beautiful ground at Sherstone Magna and the lads of Crudwell CC. Much talk about fast bowlers etc ensured and I have to say the Crudwellites looked pretty good as they unpacked their cars. Mr Bush taking the Captaincy for both days elected to bat first and with the worlds largest boundary (when umpiring I took two buses, a tube and rickshaw to get to the crease) it looked a long haul.
Ginger and Mr Spillane however got us off to an excellent start, albeit slightly streaky in Gingers case, who then went on to his maiden half century. but the score ticked on and up. A bit of middle order collapse was stiffened by Messrs Dumb Bunny and Mr R and tea saw us sitting on 143 (well chairs really, but you get my drift). Personally I thought 180 was a winning score, but as has often been proved I know nothing about anything.
Anyhow it was straight into the attack with Captain Bush and Mr J getting a quick breakthrough. And then it was steady if not quite plain sailing. Salix dropped a record 8 catches on the way to this win, but if my memory serves they were all pretty hard (well I dropped a sitter or two but then I am fat and old).
And so we finished our tour triumphant. Two games, two wins. One pub, forty eight pints. And a half a stone less Clarkster thanks to the Atkins diet. A special mention to the lovely Mrs R who braved the seething vat of testosterone that is Salix . Man of the tour was Ginger who drove off clutching a large bottle of Bombay gin. It had been a close thing between him and Dumb Bunny.
And now the London Nigerians. Enjoy the buzz lads, it won’t last.