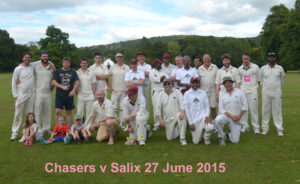 The Games – We played two games and were blessed with really excellent weather, especially on the Saturday. The Chasers game is reported below (and doesn’t appear in the stats) and the DJs game has a regular report, which shows we lost… badly!
The Lads – Ranging from 27-62 our motley crew comprised ex Capn Ben, Mr Tumnus (who Porsched it down from Manchester) , Irwin (making a welcome comeback to the fold for his first game in 11 years), Dozy , CK1, MediumSilva, Tuffers, Nelson, Nurdler, Delilah, Fevin and yours truly, Yesterday’s Man.
Big thanks also go to Jon and Steven of the Chasers (well, everyone really) for all their help, an excellent tea and a great
game.
The Game – A 2 x 20 over “Test Match” was played and Salix were captained by Ben. Winning the toss we batted first. The bones of the results are detailed below. Up until the middle of the last innings it was a game that could have gone either way and although we ultimately prevailed it was not a game that demanded a result, merely to provide a good time for everyone and that we surely got.
MOTM went to Dan from the Chasers (and well deserved) 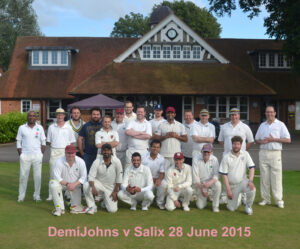