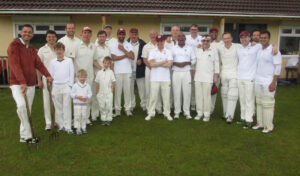 The Games – We played the Saturday game v the Chasers in Hereford at the Whitecross High School and Sports College. We managed to get 20 overs of the Chasers batting in and a couple for Salix. However, a severe rainstorm left the pitch very wet but just playable, then a clear spell gave us hope but then it absolutely hammered it down for ages, flooded the wicket and outfield, and we forced to call it off.
Sadly the same weather was occurring in Oxford where the DJs had already had their Saturday game rained off and by early Sunday the Trinity College Ground was still flooded under the covers, so our Sunday game was also called off. On the bright side, we made it back to London in time for many matches in the Euro 2016 round of 16.
Man of the Tour (Match) – was our elderly bearded ex opener the Nurdler who bowled 3 overs for 10 runs and 3 wickets (one of which was an 11 year old). Big up to Fev for his 2 overs 1 maiden 1 run 1 wicket spell and boo hoo to Smutty who dropped a dolly off me whilst chatting to the umpire.
The Lads – Ranging from 28-63 our motley crew comprised Dozy, CK1, Tuffers, Nelson, Nurdler, Fev, Padders, The Rusty Barron, – Yesterday’s Man, Pretty Boy, Michael Flatley and the Smutmeister. Big thanks also go to Jon and Steven of the Chasers (well, everyone really) for all their help, an excellent tea and great fortitude. 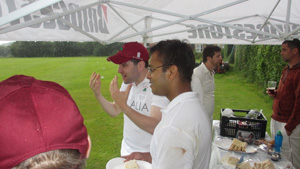