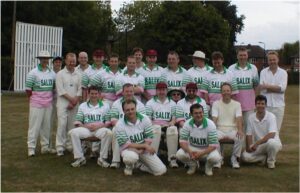 Captains day dawned a little overcast and a battle between Mr Kettley from the BBC (a fine and sunny day) and Francis from Sky (going to piss down). As ever the BBC were right. As also per usual the team turned up late and languid and we were honored by several guest players, three of the Mighty Wanderers and a huge crowd by our standards, even if most of them were under 5. As ever the club golf cart proved a big hit with the younger players. A guest appearance from Mr Orr Ewings venerable cricket boots (circa 1945) and Gingers young lady who had jetted in from Dallas for the occasion saw us ready to give out the prizes. We then took to the pitch in our now traditional 18 overs then tea then 15 overs mini test. As England overpowered the South Africans at the Oval we wondered whether the adage a “good old ‘un will always beat a good young ‘un” could be true. It’s not. Batting first, the aged Clarkstars put on a fair whack in the first 18 with Dodge (playing in a designer jock strap borrowed from Mr Fletcher and never given back, thank god) doing a Freddy and ably supported by Chazza and Robert OE. The Ginger Spinmeister had a good way with the bowling but the runs still flowed. So to the crease came the Raynites, controversially opening with, er regular openers, and swansong Podge and the Ginger one put on quite a few before the aged Spinmeister Senior bowled the student with a loopy one and the Raynites were 19 ahead at tea. It was to prove a big hill to climb.
Tea was spent watching the South Africans crumble on the big screen and then it was back out. The Clarkstars, truth to be told, made a bit of slow start with canny bowling from the young ‘uns (esp Podge) and a few comedy moments ensured (eg fat blokes falling over). However by close the Raynites required only 65 to win off 15 and although Bushy and Dr Dustman made a slowish start, it was all over with a few overs to go.
So the cheap bottle of South African sparkling wine to the under age drinkers, Nurofen and liniment to the oldsters and back to the bar to discuss exactly what kind of non prescription medicine was Andy Bush on when he ordered those green and pink one day shirts. We’ll probably never know.