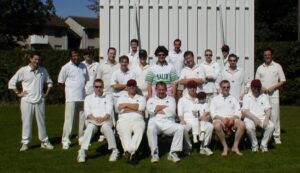 Report
Captains Day dawned hot and sunny. After the prize giving the Captains tossed and Ginger won, electing to bat. The scenario: 20 overs then 15. Teams must have the batting order reversed between innings and retire on 30 (although the head of the Hordes seemed not to hear that rule..) But I digress. Adopting differing tactics vis a vis batting order, the Barmy Army opened with two big hitters who rapidly took the score to 50 for none, thus paving the way for the typical middle order collapse. In fact if it hadn#t been for the surprise appearance of our expatriate member Andy #Supersize me# Bush who stopped his cab en route to Heathrow to hit a rapid 29 the Barmy Army would have been in a poor position. The Hordes then took the field and had an early order collapse (or was this a strategy?) and twas only a manful innings by their Captain plus a little tail wagging that saw he scores level at tea.
And so back out and the Gingers middle order made up for the first innings and rocketed away. Thus it was that the Hordes needed 91 off 15. They started very slowly and although the Rhodesian Love Machine plodded steadily on (until he was carried off) it was only the reappearance of the Captain again that put them back into contention. And thus it all came the final over with the German boys needing 3 to draw and 4 to win. And Rog bowled a dot ball, they hit a 2, then rog rolled down 4 more dots. And on the last ball Stu needed to hit 1 to draw, 2 to win. And he swung mightily and connected and got it.
The winners: the Hordes in a classic last ball thrilla, the like of which we have not seen for many years. As its Captains day the scores don’t count in the book, so we were all free to try a little something different (and I don’t mean getting a duck). Cream of the bowling, New Dom with an inspired spell, cream of the batting, the German who basically won it on his own, cream of the fielding, well all of us for just turning up.

Our Roll of Honour 2004 (Prizes presented by the lovely Fiona, better half of our ageing fastie Steve-O)

Matt Swindells Best Batting 2004 222 runs, averaging 37. He has the places 3,4,5,6 and 9 in the seasons top scores! His fielding leaves a little to be desired though as he dropped a dolly off Fletch at
Oxford.

Christy Kulasingam Bowling Excellence 2004 Chris has only taken 4 wickets at an average of 4.4 an over but he has kept us in the game in many matches.

Mike Ellis Bowling Excellence 2004. Not such a good year with the bat, but has taken 18 wickets and
has the teams best economy rate of just over 4 an over and has bowled the most maidens too – 9 this year.

Jehan DeSilva Captains Award 2004 112 runs, averaging 22.4 although he started as Quicksilver he
seems to have slowed a little, but anyhow his bowling has been great taking 7 wickets and catching more than he dropped!

Lurpak award
With only 4 catches from 13 tries, Andy Rayner is a winner. Although Ollie 3 drops from 3, Matt 1 catch from 4 and Ginger 2 from 7 ran close. Best fielder no doubt, Fletch with 8 catches out of 11.