The sun shone brightly on the assembled righteous as we set out for Captains Day. Only the mysterious non arrival of Clarkster puzzled us for a microsecond, before we got on with giving away the trophies for this year.

Then Mr Magoo wiped the floor toss-wise with the Fumbler and it was the non regulars out to bat. And a cracking start was made with the hard white ball getting knocked around a bit, then things slowed but the two W’s Zim duo put on a magnificent display (well, one of them anyhow). Matters of note: Tinkers bowling – 3 overs, 4 wickets for 14. Of course the Waynester then piled into him in a Steve-O style last over and it was goodnight Irene for our bulky middle order player from the East. So at 161 the Fumblers boyz had it all to do, however not content with smacking the ball around, the Waynester smacked a few wickets down too and it was looking like Cap’n Ben would try to do it in singles until Ginger II came out and lashed the bowling to all parts. At 129 at tea it was all to play for.
However, after the usual outsourced repast the Fumblers men seemed to lose a little heart in the field and suffered a severe caning to all parts. With a total of 207 to chase in twenty overs it all looked like it had gone plenty Pete Tong for the Old Skool. However the top order lashed mightily into the bowling and Cap’n Ben again tried to do it in singles and Myring, Mr A and Ginge knuckled down – and they stayed on the run rate for a while. However despite Mr Magoo’s boys putting down a zillion catches, wickets fell steadily and as the last over dawned in the Stygian gloom of a September night, Podge and the Fumbler required 59 off the last over to win, the Waynester trundled in for a death over going for just 5 and the fat lady had indeed sung. A game of two halves.

Points of note: Denver boy the Hoguester taking the catch of the decade – a death deying horizontal hurl across midwicket and a new record for Salix, set by the Smutmeister, 3 dismissals in 2 balls: that’s run out, returned as lowest scorer, golden then next innings, golden.
MOTM, the Waynester (quality ringers supplied by Wazza). Mr Magoo’s XI won by lots of runs.

Tons of awards, however hardly any for excellence. Still, in the immortal words of someone or other, we’re all winners. Especially on the day we play with each other and win.

1000 runs for the team award And a special tankard to mark his long 5 years. – Cap’n Ben

Retiring Capn Ben annoints the German as succcessor and also 1000 runs and best player 2005 (and thats it, we can’t afford any more gongs).

Special Awards: most wickets ever for the team – Steve is the Director as Murali is to Warney…

Batsman of the Year – Bison 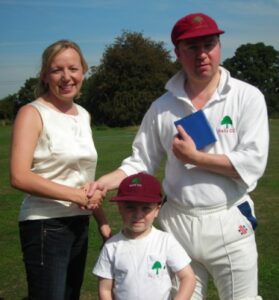 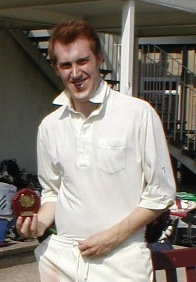 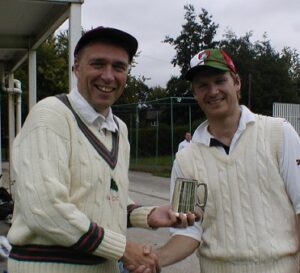