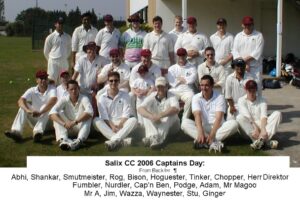 After a week or so of abysmal weather (hose pipe bans still in force!) and England getting massacred in the Stygian gloom of Lords by Pakistan, the outlook for cricket didn’t look too bright on Captains Day. Well, I am nearly always wrong these days as so I was again. After a dismal start, it brightened up so much that Padders went redder than a new VKS Cherry and will be needing the after sun copiously rubbing in. But I get ahead of myself. At 10.30 several people dragged themselves up early to have a go versus Bison’s new bowling machine. As to be expected there were a number of injuries resulting from clueless operators turning it up to 99. But a DVD was made (I’ll be in touch separately about this). Around 12.30 those with hangovers etc turned up and the prize giving got going, with
the lovely Julie (better half of our aged Chazza, not that that’s hard..), mostly avoiding the hirsute embraces of the winners., We then assembled for a team photo (ta Victoria) .
Then it was the toss and Ginger’s boyz trotted out to bat under a blazing sky. I won’t write a blow-by-blow account of the events as the scoreboards tell much of it, but will resign myself to some selected highlights, as viewed through the distorted prism that is my senile recollection.
In Gingers first innings we did pretty well and trotted in with 129. Looked ok. However Padders Angry men did quite lot better with 146. It had become apparent that the difference between the sides was in the quality of imported players and whereas Elvis had judiciously imported a County level batsmen and spinner for Padders men, Gingers ringer had turned up a little on the pre-beveraged side. Well, I say a little..
Still, after the usual appalling tea, it was still there for Gingers men, however we became sadly becalmed and left them only 90 to get in 20. However we went out with plan to keep the openers in whilst stopping them scoring . This worked ok until SteveO cracked a massive one towards my face which gave me no choice but to catch it or have my nose rearranged. Stu then dropped Raj and had his Equity card revoked and after that Wazza and Umish wrapped it up with 5 overs to spare. Iin particular Umish hitting a final 6 onto the Pavilion roof to simultaneously win the game and retire was a metaphor for his overall performance..
I have now eaten a whole packet of Nurofen and had a curry so am somewhat back to normal and would like to end by saying a big thank you to all our guests, welcoming our 4th ever father son partnership of Ian and Peter Roberts and generally hoping you all enjoyed it as much as I did.

Player of the Year: CK1