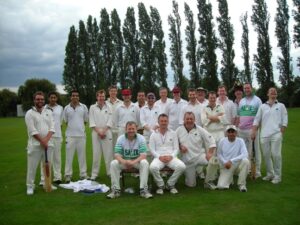 After an abysmal summer of weather, Captains Day didn’t disappoint being exceptionally gloomy, but at least it didn’t rain. As per usual the hordes assembled to avail themselves of the Bison’s bowling machine, manhandled over the barbed wire fence with aplomb. The usual suspects were given cheap gongs (big ta to Mrs G and Mrs K for doing the business), and we were delighted to welcome several first time guests: Daoud, Peter and Sahil, to see Puffs People take on Choppers Champions. Tossing with a packet of Marlboro Light, Puff correctly called “Smoking harms your pregnant baby “ instead of “Kill, die, banned in pubs” but then bizarrely decided to field first. Still…

And so at tea (4 muffins between 22) it was time to reflect on innings one. Certainly for Choppers boyz, Bison, resplendent in a pirate hat and Daoud had done the Bizzo batting-wise and for Puffs lads, Elvis and Sahil had been spinmeisters too far for several hapless batsmen: basically though the bowling had been decent and the batting OK. However as Puffs boys strapped on their gear this was all to change as the bowling got a little bit less good but the batting got a whole hell of lot worse. Ginger and the Direktor made a brisk start, slightly hampered by a calling problem, but then it rocketed downhill with only Arsey and Padders getting us anywhere near respectability to leave the Puff Men adrift. Well it was doable. Maybe…

Predictably of course, after tea it all went somewhat awry as as Choppers boyz really got stuck in to the bowling – especially Dickie and Flossie who started walloping massive sixes off Sahil and Padders. Quite why they can’t do this in regular games is beyond me, but I digress and so at close Choppers men looked impregnable on 127+97 being 224. As the Puffs men marched out into the darkness of a British summer, 141 were required off 20, being 7 an over. And so the openers promptly collapsed one after another, with Tinker racking up his third duck of the day (a new club joint record) and only Arsey whacking. But then cometh the hour cometh the man and Elvis and Puff got really stuck in and the score gradually rose as the gloom deepened but there were not many wicket or balls to play with. And with nearly 60 required the Direktor holed out a soft one to square leg and it was down to Puff, Sahil, Ginger and Arsey. And they reached into their cricket boxes and pulled out the big ones and as Baldrick came in for the final over, 9 runs were need off 6 balls and Puff hit a four. And had to retire. And Arsey came in and hit a 2 then a 4 for an ecstatic victory. And what a game, you couldn’t have inserted a fag paper between the teams.

Christie Kulasingam Player of the Year 2007

Bowler of the Year 2007 Andy Harvey

Supporter of the Year 2007 Cameron Jacobs