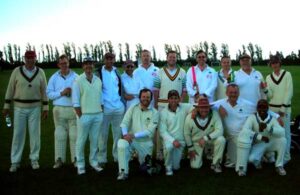 Despite the abysmal august weather and the Pakistani match fixing allegations which surfaced this very morning we managed to assemble 18 –mainly perambulatory – humans, one or two of whom were even not hung over. Special thanks to JP and Brog who came round from Gravesend and Charles of the CAC who helped us make up the number. And of course Seed-O.

Virgin Captain Dazzla’s men faced off against a Yesterdays Man Select 9, with the Dazzla’s lad batting first in overcast conditions. They put on a creditable 106 despite only batting 17 overs. Highlights of this innings were Elvis’s 26 and a good knock by JP. The Nurdler bowling competitively for only the second time in 10 years took 2 wickets. Just as the last ball was being bowled however a huge hailstorm hit the ground and we were sent scurrying for cover. In the event we were then forced to take an early tea, play a game of French cricket and then wait a half hour. By this time it was blue skies but a howling gale… Facing up Yesterdays Mans boyz promptly collapsed totally and completely pathetically and the innings was only saved by a huge knock from CK1 aided by yours truly and the Nurdler (who then did his hamstring again. This now happens once a week.)
A quick turn around saw a second 10 over innings. Dazzlas lads put on a good 93 with some good whacking from the Tink et al. And so Yesterdays Men needed nearly 9 an over in the deepening gloom and boy did they try hard. Big knocks from CK1, Tricky and the Chopper got us a close but it was an over or two too far and Dazzlas lads ran out winners by 12 runs.
Big up to Padders and the man who is now slightly less hirsute than before for organising it.